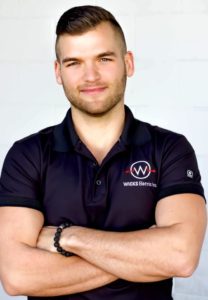 Adam spent his early years growing up on Bowen Island, eventually relocating with his family to North Vancouver. He attended Sutherland Secondary, where he excelled, both academically and in sports. He was the captain of the basketball team and was named Athlete of the Year for his two senior years. His leadership skills were evident even then. Adam was honoured to speak to the over 1200 students of the graduating classes of VCC and CDI in the fall of 2015 and was the keynote speaker at BCIT’s 2016 Alumni AGM.  He is also thrilled to be a winner of BC Business 2016 30 Under 30! Adam began his electrical apprenticeship in 2007 with the one goal in mind: to acquire and master the necessary skills to start his own business. Building a reputation for a business that provides outstanding workmanship and customer service while providing people with a job they love has always been the source of Adam’s excitement and inspiration. He has established a team of first class electricians, ones who share his passion for the trade and who portray the same positive energy. Adam believes building long lasting and trusting relationships with all his clients will be the key to his success. In what little spare time he has, Adam enjoys playing in the men’s basketball league that he sponsors, hitting the gym, hiking, snowboarding, travelling and reading. 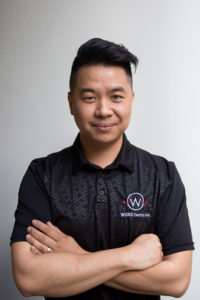 Bill was born and raised in Vancouver and completed his Red Seal ticket at BCIT. At one point he and Adam were classmates. They share a similar dedication to the trade and Bill joined Wicks in April 2017, bringing over 12 years of varied experience to the team. Bill is dedicated to perfection in his work. Bill and his wife Tracy welcomed their son Emmitt to the world in the spring of 2018!  The first baby for the team here at Wicks! Bill has little spare time these days but enjoys racquet sports and has traveled to Hawaii, China and throughout the western States. 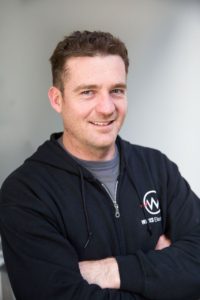 Ryan grew up in Adelaide, South Australia – home of the mighty Adelaide Crows. In 2010 Ryan moved to Canada and began his electrical apprenticeship. His passion for the trade and commitment to always learning and perfecting his skills earned him his red seal certification in 2017. Ryan sought out to work for Wicks Electric because he admired the company culture, comradery and dynamic electrical projects always in the works. When Ryan is not managing a work-site he is likely watching or playing sports. He currently plays for the Vancouver Cougars and is on a softball team. Fun fact about Ryan: he is very eco-conscious and is always looking to incorporate renewable clean energy sources. 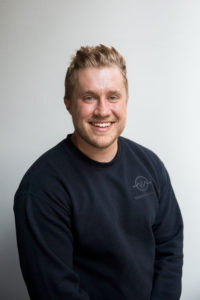 Dean has been our Service Tech Wizard for the past year. The feedback from clients has been 5* amazing – everyone loves his cheerful personality and the quality of his work. He became an electrician because he enjoys making and fixing things and takes great pride in his work.

Dean is an seasoned traveler and has visited every continent except Antarctica, which is on his bucket list. He is an avid outdoors-man and in his spare time loves hiking, surfing and skiing. 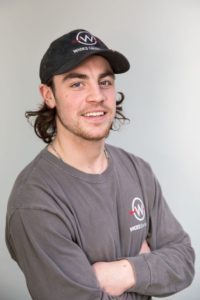 Quinn was born and raised on the North Shore and also attended Sutherland Secondary.  He was working as an apprentice for another electrical company when he ran into Adam at the gym one day.  Recognizing the Wicks Electric name on Adam’s shirt from high school, they struck up a conversation.  Adam was impressed with Quinn right off the bat and soon convinced him to join Wick’s Electric where has quickly risen through the ranks to become an important member of them team, successfully managing job sites and projects. In December 2017 Quinn completed his apprenticeship and is now a Red Seal Journeyman Electrician. Adam says that Quinn is an all-star in everyone’s books and is an invaluable member of the team. Quinn is a huge sports fan, (Go Canucks Go!) and enjoys playing hockey, soccer and working out.  He enjoys being on and around the water and loves to fish. 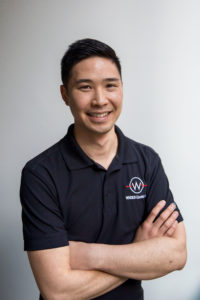 Chris was born and raised in Kamloops, British Columbia. He completed his Red Seal certification in 2011 at Thompson Rivers university and went on to acquire his FSR-B through Ace Trades Institute of Technology. Chris is a well-versed electrician having worked on residential, commercial and industrial projects. Chris was attracted to the electrical trade because of its diversity and being able to develop so many specialty skills. He likes the thrill of being able to solve a problem and to work with new clients everyday. Chris got started with Wicks in the Fall of 2017 and is currently our lead service technician. When Chris isn’t in work mode he is out and about around Vancouver exploring the mountains, restaurants and coffee shops. Fun fact about Chris: He loves to travel and so far he has visited 30 countries. 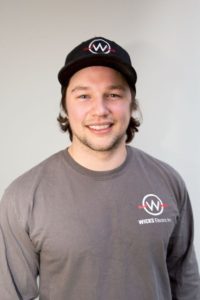 Dustin met Adam through a mutual friend and would run into Adam at the gym and they would strike up a conversation. He was just starting his apprenticeship at that time over three years ago. As Wicks Electric grew and Adam was looking to hire an experienced 3rd year apprentice he immediately reached out to Dustin and asked him to join the team. Along with experience he contributes his enthusiastic energy to the team. Dustin is an avid hockey player and has played the sport for over fifteen years, 11 years in a minor league and 4 years in junior hockey in the Lower Mainland, Kootenays and Alberta and loved every minute of it! He also coaches peewee hockey at the North Shore Winter Club. In his spare time he enjoys working out and long walks on the beaches. 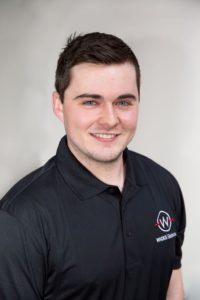 Turner was born and raised in North Vancouver and is also yet another member of the Sutherland Secondary alumni. He played most of the sports available to him at Sutherland including; basketball, soccer, rugby, golf and badminton. However he was also playing baseball, football and lacrosse outside of school. He remembers seeing many of his new co-workers in the hallways like it was yesterday. And since recently joining the Wick’s crew, he is able to see those beautiful faces everyday once again. Turner started his electrical training straight after high school and has continued on and off for the past 7 years. He has a wide range of electrical experience, from industrial metal fabrication plants to commercial retail stores and constant home renovations. Turner is a student at BCIT and is in the process of completing his Red Seal electrical certification. When he’s not playing soccer in the winter or softball in the summer, he likes to spend his free time traveling with friends, hitting the gym, hiking with his dog or trying to guess next weeks lottery numbers. 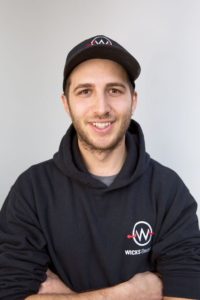 Ty grew up just outside of Vancouver in the town of Tsawwassen, but moved into the city shortly after high school in an attempt to be closer to the mountains, beaches, and cheap sushi. Ty is currently in his first year of his electrical apprenticeship after completing the Trades Discovery course at BCIT. Ty was drawn to the electrical trade because everything happens so seamlessly that it feels like complete magic that at the push of a button you can have light, warmth and entertainment instantly – he takes pride knowing he can bring some of that magic into the world every day. Ty has been with Wicks since his practicum at BCIT.  In his free time he enjoys hiking, climbing, skiing, and playing as many musical instruments as he can get his hands on. 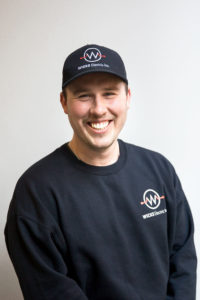 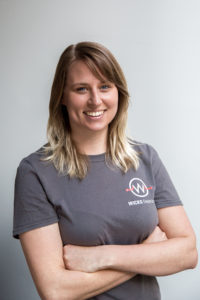 Sarah hails from Ladner and got into the electrical trade because she loved helping her parents with construction projects growing up. Once she took the electrical foundations course after high school, she fell in love with the work. She is now going into her 3rd year of apprenticeship. Her work ethic and cheerful nature make her a favourite of all!

In her spare time she enjoys hunting and going to the gym, and she is a self confessed homebody who loves reading, knitting, Netflix binges, and classic video games. 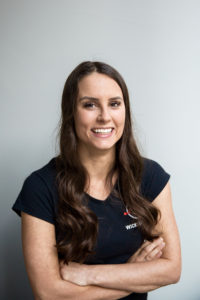 Shawna was born in Sherbrooke Quebec, but grew up in Vancouver. She is a proud French Canadian that speaks the language fluently.  Her educational background is Business Management with a focus on accounting. Shawna runs the various day to day workings of the business. From book keeping and accounting to customer service and scheduling, she is an invaluable member of Team Wicks!
Shawna is an avid traveller and has visited over 10 countries in the past 5 years.  In her spare time she enjoys hitting the gym or hiking and biking with her 1 year old chocolate lab/terrier mix, Cooper. 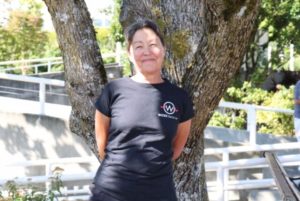 Cathy (Momma Goose) helps out on the administrative side of the business. After 35 years in nursing she retired from the profession and she and Terry moved to the Cowichan Valley on Vancouver Island. Cathy and Terry celebrated their 34th anniversary August 2016! Cathy brings her sense of entrepreneurship to the company as she ran her own successful home health business with over 100 employees for a number of years. She has travelled widely, mostly to warmer climes where she was a sailing instructor, a DiveMaster and she has delivered yachts to and from all points between Mexico and Northern BC. Cathy enjoys being on, in or under the water, horses, long walks,  gardening and cooking and is an avid reader. But best of all, she enjoys spending time with the boys;  Adam, Cody and Tyler!